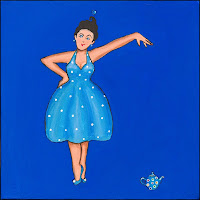 http://www.agracefuldeath.blogspot.com/ for an account of the exhibition I am putting on in December in Chichester on the End Of A Life with Cancer
http://www.antoniarolls.co.uk/ for my website
antonia.rolls1@btinternet.com if you want to contact me
Here is a Teapot Angel to make you want another cup of tea.

We hung the Angels up on Sunday, they are in full glory in the Oxmarket Gallery in the foyer. Eileen came and helped me, and took photographs of them on the Saturday so that she can make prints, and then helped me hang them on the Sunday. We were only the Foyer Artists, there were other Main Exhibition Room Artists too, setting up and being busy and wonderfully arty and modest. We only had 12 Angels to put up, and I had done all the Exhibition Blurb well in advance, so Eileen and I had time to go and preview the other exhibitions. Not only was the work good - there were two groups exhibiting in the big rooms, and one landscape artist in the bigger part of the foyer - but the energy and enthusiasm of the painters and makers-of-things was terribly impressive. It was wonderful to see so many people take their desire to make art seriously and actually Do It. I love these group exhibitions. I think the works displayed are impressive because they are made by dedicated, inspired, brave and ordinary people. The standard is often really high. Many of these modest and clever people do their art professionally now. The landscape artist too, setting up her work, showed beautifully observed and lovingly painted local scenes, framed to set them off at their best.

And now. The school play. At last my 13 Year Old Son could give in to the drunken wife beating murderer in his soul and play Bill Sykes. It was a wonder of wonders. "Oliver" was the school play, and a very good choice too, as much of the school could take part. Indeed, I spotted in the Workhouse Scene a wonderfully well fed and bright little Chinese boy in glasses. Each of the work house children wore the grey school shirt and trousers ripped to shreds, which worked very well. Either they all held each other down for a pre play free-for-all or someone has been collecting lost property. It also explained why Bill Sykes came home recently from school with the breast pocket of his school shirt ripped off. "I ripped Fred's off and he ripped mine off" was all I got for an explanation. "It was fun" he added to make it clearer still.

The characters played their hearts out. My Bill seemed really violent and we could feel the angiush of Oliver, Nancy and Selected Ruffians mothers in the audience, and when Bill got shot in the final scene a tiny child in the audience was heard to say "Oh good". I suspect quite a few of the well brought up liberal thinking parents echoed that deep in their hearts. Bill was full of fury and wore a top hat which made him taller than most, and a big leather coat which made him look like a Hells Angel and big trousers that made him look like he may have Welsh International Rugby Thighs underneath. The whole effect was that my darling little 13 Year Old Son made everyone else look angelic, misunderstood and reasonable.

I have to say though, he met his match in Nancy who played her part with a seriousness and intelligence that made me think she'd never have chosen Bill if she had been asked when the book was being written. She was truly a star, and lovely to watch and listen to. And I know for a fact that her mother found her the perfect dress, red and black, and should be applauded for finding exactly the right outfit.

So. A busy weekend, and much achieved. Briefly, 16 Year Old Son came back for a visit and ate like a mother wants her son to eat, that is, without a pause. Alan paid a welcome visit after his work and tennis, and Oldest Brother and his partner came for Sunday. Monday is a doddle after all that.
Posted by Antonia Rolls Artist and Soul Midwife at Monday, November 23, 2009