Not Quite The Bognor Renaissance But Getting There


The Bognor Renaissance Needs A Bit More Time
I said this blog would be about the Bognor Renaissance, and so it is.  It is about how it isn't quite here yet, but then, it is possibly very hard at the beginning of a movement and one may not know it was a movement till a long time afterwards.  Unless of course it was a very self conscious movement, which gave itself a name and a start date and then got on with it.  I imagine the Italian Renaissance took a while before anyone noticed that they were in a hotbed of artistic, cultural and intellectual  endeavour.  And quite possibly they didn't all wake one morning and with one breath, one mighty uniting of souls and purpose, shout, "I know what this is!  It's the Renaissance! What fun!"  It was given the title of Renaissance long after it had moved on to Mannerism or some such thing.  Oh.  What if Bognor moves onto Mannerism.  How wonderful.  See below 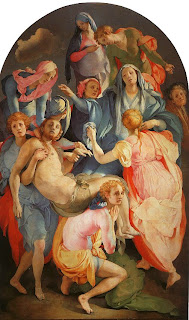 Pontormo's Deposition of 1525 -28.
Mannerism was about those pale light colours and rather elongated and exaggerated figures.  This fellow, Jacopo Pontormo, was famous for his entwining poses and rather ambiguous perspective;  the figures seem to float, not being too concerned with gravity.  I love this painting, I love it's strangeness and silence.  It is slightly exaggerated and the figures much freer and looser than perhaps, a Fra Angelico.

This is a Fra Angelico Annunciation - a real Italian Renaissance fresco no less, from 1438-45.  Here the poses are much tighter and the figures more angular.  I imagine that a fresco would be jolly hard to do, as one has to work in egg tempura onto sections of wet plaster bit by bit before it dries.  To get this wonderful finish he must have been so careful.  He probably had helpers, but even so, it must have been very difficult and precise.  Here, there is perspective, architecture and depth.  See how the arches continue around into the background behind the angel, and how there is another room entirely behind the Virgin.  How clever. A suggestion of space and depth.  There are little flowers in the grass, and the columns have perfectly painted classical capitals at the top, which I think are a mix of Corinthian and Ionic.  But definitely Greek so very Renaissance.
Briefly, so that we can get on with the possible Bognor Regis Renaissance, the Italian Renaissance stretched from about the end of the 13 Century to the end of the 16 Century.  A long time.  The word Renaissance means Rebirth, and it was coined much later, as those in the Renaissance didn't have time to know that they needed a name to identify themselves.  It was a time of huge cultural and artistic change and development, inspired by a newly discovered fascination with classical culture and antiquity.  It included Art - painting and drawing, Architecture, Mathematics, Poetry, Writing, Philosophy, Sculpture...the first Art Historian was a Renaissance man, Giorgio Vasari wrote the Lives of the Artists published first in 1550 and still in print today.  I have a copy.  I expect lots of us do.  I am not in it though, and so we need to update that.
So.  Bognor is on its way with its Left Bank.  In order to be more Renaissance, we need to become less Bohemian and more Intellectual.  We need some Philosophers (I know one!  She lives in Stoughton!) and we need some Mathematicians (there is a maths tutor in Barnham, wonder if he is interested).  If I could find an Architect - it must be possible, someone must have designed Bognor.  I know someone who is interested in Architecture, they can be a fill in until a real one comes along.  We need writers and poets.  We have those.  Plenty of those.  I know there are all sorts of Artists too, and designers and people who work in Glass (stained glass etc) and Sculptors.  I know there are Sculptors around, I can sense them.  Oh!  I know a brilliant one who used to live in Chichester, see if I can get him to move back.  Something that may be more difficult is the unearthing of hitherto unknown Greek Treasures, buried since Antiquity.  Well, two ways around that are a) we have lots of Roman remains in and around Chichester, like Fishbourne and the probable ex Roman Amphitheatre site behind the car park in Chichester on Market Street.  We can use that.  b) forge some Ancient Greek Finds.  (Honest Guv, it's a real Zeus.  It was floating around Bosham Quay and I just found it.  I reckon a genuine Myron.  Or Praxiteles. Or Whatever.)
Artistic Bognor could base itself on any Artistic Movement in history if it really wants to be a thriving maelstrom of culture and ideas.  A gentle rather laid back maelstrom, with much chatting, tea and toast, peanut butter and flapjacks and Facebook.  And Annabel Church Smith's truly splendid cup cakes.  I think I am going to see how the Left Bank Bognor goes before gently easing into the Bognor Renaissance.  I feel we may go rather quickly into Mannersism though, personally I am quite inspired by them.  See how the others feel, as we trudge along through the other Movements.  I hope we don't stop off in Dadaism or Fauvism just yet.  I need more time and some good nights sleep before tackling that.
Oh how exciting.  Now.  What would Giorgio Vasari make of all this?  "Mama mia!" he would say with feeling, "eesa geenius."
Posted by Antonia Rolls Artist and Soul Midwife at Wednesday, January 26, 2011