Bognor Regis is Impressionist And Wistful

www.antoniarolls.co.uk for my website
www.jesusonthetube.co.uk for the Jesus on the Tube website, a very well known image
www.agracefuldeath.blogspot.com for the A Graceful Death exhibition, paintings from the end of life


Bognor Regis Is Impressionist  And Sighing Deep Sighs
Its the wrong weather for Bognor Regis to be truly Impressionist, it is raining outside and is grey and low key.  We Bognor Impressionists don't feel like going out and painting in the Open Air.  Our Impressionist tendencies are waiting for better weather.
In Paris in the mid nineteenth century, a small group of Artists formed a sort-of association, thinking more or less the same things.  Their main thought was that they did not want to follow the old established rules of painting and produce what was sociably acceptable.  No no no.  But they didn't go at it hammer and tongs and produce a cow in formaldehyde, they did something that was really outrageous.  They painted out of doors.  (Nooooo).  Academy Art, the established stuff, was painted in a studio and generally showed figurative historic scenes in tightly, smoothly applied paint with rather dull colours.  In short, it was conservative, uncontroversial, satisfactory, safe, dull and rather yawn inducing to our young Impressionists.   The compositions of the Established Stuff were carefully planned so that you didn't get any nasty surprises (a table that jutted out of the corner of the painting at an angle, someone strolling into the scene at the top of the painting which meant that they were not paying attention and mucking it all up).  Nudes were modest and in context (classical Greek mythology, demure studies with no real girly bits or if there were men, no real boy bits).  The paintings also tended to be very grand and large.
This is where we in Bognor have something in common with the Impressionists.  There isn't much classical art here, and we don't like the idea of Nudes with No Bits.  We don't want to spend ages on following the rules of composition and content.  We like a bit of slap dash.  We also, when it is not raining, quite like a jaunt outside to paint a tree or a field or a passing cow.  But wait, there is more.
This group of rather daring youngsters could not get the Academie des Beaux-Arts in Paris to accept any of their works. The Academie des Beaux-Arts was the place to exhibit.  It held yearly shows where reputations were established, commissions procurred and a sigh of relief heaved deep in the bosom of the accepted Artist.  The answer to this lack of success for our outdoor painting, free brush stroke using, pure colour selecting mavericks, was to establish a Salon des Refuses and let the public decide what they thought. 1874 saw, eventually, the first official Impressionist exhibition which was held in the studio of the photographer Felix Nadar.  This painting following  - 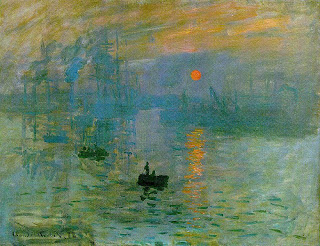 Impression (NOTE THAT WORD - ARE YOU SEEING WHERE THIS IS GOING?) Soleil Levant (Impression sunrise) by Claude Monet 1872
this painting above, caused a critic to write a casutic review of the exhibition with a curl of his lip and a single raised eyebrow, and call them Impressionists!  That'll teach them, he chortled.  Ha!  Let them try and live a normal life now, the dirty blackguards.  Pah!
Are we so dynamic?  Yes we are.  My dear Artist Friend in Middleton - Anne Winterbotham - doesn't give a fig for convention.  She does her own thing and is out there, painting in lay byes and fields, in her garden or up a tree, capturing her own vision of nature.  Anne has been a very fine illustrator and knows the ropes, but tends to do her own thing in her own way now, and would probably  be quite short with the Bognor Academie des Beaux-Arts if they annoyed her.
Impressionist paintings were gloriously freely painted.  The paint was applied swiftly and thickly, capturing movement, a moment in time, and the feeling we get as we look at a scene.  They didn't like to use black or grey, and painted the shadows on a hot Summer day in deep dark blues, making the feeling of the painting so real.  They painted landscape (not a popular subject) and still life (not popular either) and painted people walking in and out of the composition as it really was.  Oh marvellous.  Look again at the Monet above.  Look at the blues and the greens and the oranges.  Look how the paint swirls in free and confident lines, and how the impression of the sun rising over the water, with the boats, the harbour and the reflections in the water all strike at our feelings and we know what the artist is seeing.  We can almost hear the spash of the water and we know a new day is beginning on the water front as the sun is rising. 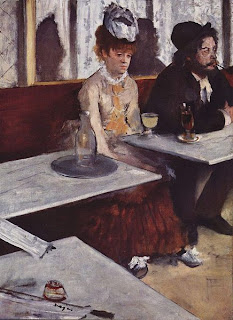 L'Absinthe by Edgar Dagas
Degas despised the term Impressionist.  I love how artists despise things they don't like.  I despise creme caramel and jaffa cakes.  I despise untidy bedrooms.  But Degas was loyal to the group of artists called the Impressionists and is considered a sort of one, though don't call him one it to his face because he hates, loathes and despises the term and may hit you.  Here, in the painting above, a drab actress, living a bit on the wild side, sits slumped in a tavern with a man to her left who doesn't look like an Academie des Beaux-Arts gentleman, and she has her feet splayed.  Dreadful hussy.  What is she drinking?  Absinthe?  Oh lordy lordy the woman is crack head.  And most absurd - what are those goddamn tables doing poking about all jumbled up in the bottom left of the painting? This is considered a wonderful painting now, full of character and real life.  We love how the tables are placed, it feels as if we have just walked in through the door and this is what we see.  A snapshot.  It was considered scandalous to the conventional artistic community.  (Degas?  Dreadful compositions. Bit of a Lout)
Well, on this rainy Bognor February afternoon, we Bognor Impressionists mean well.  We want to get out there and paint in the open, we want to use wide sweeping brush strokes to paint the Chavs in the Chip Shop (all of whom we know and are our best friends).  We long to paint Bognor Seaside with the sun reflecting in bright yellow and blue daubs of paint, and the Bognor Bird Man flying off the end of the pier like Icarus, painted in the far left of the picture. We want to sit on little fold up seats on the A259 and wave at the cars flying by as we capture them in wonderful careless paintstrokes of red and blue.  But it is raining.  Instead we will have to paint wistful impressions of the raindrops falling down our windows, and still lifes of the PG Tips boxes that litter our kitchens.  We really want to be Impressionists but perhaps this Movement is too much for Bognor Regis in February. 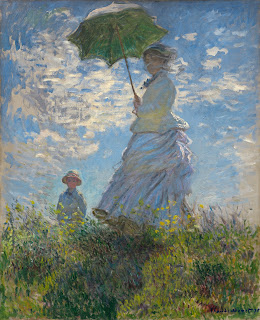 Woman with a Parasole by Claude Monet
I suspect this is not a very likely Bognor scene, even in the height of the Summer.  This is so beautiful.  It has the blue shadows reflecting the blue of the sky, and the blue in the lady's dress.  We know that she is wearing white but it is painted in blue - we get the impression of her standing in the long grass, the sun beating down and lo - is that my little 14 Year Old Boxing Boy walking casually towards her?  Is this lady Me then?  Oh I like to think so.  What lovely Impressionistic clouds they are, in the hot blue sky.  So here I am in my Bognor field somewhere, twirling my parasole and feeling very tall as the artist lies sneezing, low in the grass, in order to get me at this angle, and my 14 Year Old Son, resplendant in his new white fashionable sun hat, saunters up to me to ask what I have done with his boxing gloves and can he have a Macdonalds.
This Bognor Regis Impressionist Movement is a wistful one this week.  It can't happen.  It is only a dream.  We will all just have to continue to paint huge religious, mythical and dull paintings in browns and dark blues and continue to fight against the Establishment in the Bognor Regis Academie des Beaux-Arts. When the sun starts shining, we can rebel with a Whoop into the fields with our paint boxes and absinthe, and paint Real Life as it presents itself to us.  Meanwhile the Bognor Establishment, unlike the Parisian Artistic Establishment, will all give up being so stuffy, and join us in the chip shops for double fry ups and Life As It Really Is.
Posted by Antonia Rolls Artist and Soul Midwife at Thursday, February 10, 2011