Bognor Stripped Bare By Her Bachelors Even. Read On ...

www.antoniarolls.co.uk for my website
www.jesusonthetube.co.uk for my best known image of Jesus sitting on a tube train being ignored
www.agracefuldeath.blogspot.com for the A Graceful Death exhibition, paintings from the end of life


Bognor Stripped Bare By Her Bachelors Even.  Do Not Despair - We Have Gone Dada
Bognor is in the middle of a revolution of Anti Art.  We think the Bourgeois are to blame for everything.  We think that the reason and logic of the capitalist society is to be utterly ridiculed - not as in 1916 for leading the world blindly and ignorantly into World War 1, as that has already been done.  We are doing it because we like the idea that the capitalist bourgeois are to blame for things.  And that's what Dada is about.  And so we are doing it. 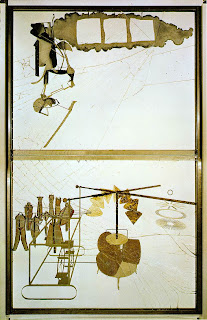 "The Bride Stripped Bare By Her Bachelors Even" by Marcel Duchamp 1915 - 1923.  This is the rallying cry for the Bognor Dadaists, because it begins with a B in the title and we can put Bognor there and feel like we belong.
We have been traumatised here in Bognor Regis by having decided, in our last Movement last week,  to become Pre-Raphaelites.  This meant that we had to reject our other Art Movements because the the Pre-Raff Brotherhood thought all art post Raphael was no good.  That would have been from about 1550 onwards, and we Bognor Regis Artists had been dabbling with just that.  We had done the Left Bank, we had toyed with Angst.  We had been boldly painting en plien air like true Impressionists and we had been sleeping for days for dreams for our Surrealist phase.  The only Movement that we could still identify with was the Bognor Renaissance, which we liked very much and thought we were good at.  Plenty of scope, we said to each other, very right on as we get to include scientists and mathematicians and astrologers and so on.  And we were all set to go out and find some in neighbouring villages, like in Westergate or in Barnham (where I know of a maths tutor who we were going to ask to fill in for us as a Brunelleschi type - think architect of Florence Cathedral - unless of course, he was busy teaching).
So now we have become disorientated and unhinged and have become Dadaists.
The Dada Movement began as a furious and energetic movement just before the first world war, in response to the madness and blind foolishness of the culture and societies that created and perpetrated such a war.  Dada was about anarchy, about ridiculing the meaninglessness of the modern world, and was anti bougeois.  It was rabidly anti-war, and rejected the prevailing standards of art at that time.  Oh they were a mad lot.  They produced manifestoes, public demonstrations, they produced visual arts, poetry, art theory, journals and theatre in places such as Zurich, Paris, New York, Berlin, the Netherlands, Georgia (Yes!  Georgia) and Yugolsavia as it was then.  Dada was vehemently anti art.  Everything that art stood for, Dada rejected.  It rejected traditional aesthetics, and where art was meant to appeal to sensibilities, Dada intended to offend.  Dada wanted to destroy traditional culture and aesthetics, they considered the status quo as having been utterly and horribly responsible for producing World War I.  Well our Dada Movement extends from Bognor Regis through to Chichester, East Dean, Arundel and Aldwick.  We are full of fury and are offending sensibilities by popping out of shops and shouting "Knickers" at people and then handing them a manifesto.  "We embrace chaos and irrationality," it says, "and what is more we don't care.  Boom boom.  Fried Potatoes. "  We have based this very loosely on the second Dada manifesto of 1918 by the Dadaist Tristan Tzara, a long and rambling piece from which the following is a teeny extract -
"The system of quickly looking at the other side of a thing in order to impose your opinion indirectly is called dialectics, in other words, haggling over the spirit of fried potatoes while dancing method around it. If I cry out: Ideal, ideal, ideal,

To get to the Art, the Marcel Duchamp piece that begins this blog is a great example.  It is considered by Duchamp as a "hilarious piece."  We agree, though we haven't done anything quite as funny ourselves yet.
Famous artists such as Max Ernst 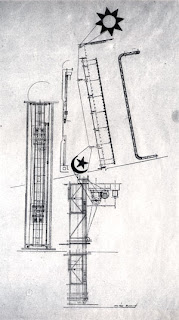 Max Ernst "Trophy Hypertrophied" 1919.  This is not considered Hilarious, but we think it worth a Chuckle
and George Grosz are synonymous with the term Dada.  They took it very seriously, and produced some magnificent work that must have paralysed those who encountered it; can you imagine being faced with this kind of thing in 1919?  There was still Picasso, and had been Cubism, and Impressionism, but this work was incomprehensible by its nature.  It was not mathematical and dedicated to producing new kinds of Art (Cubism), it was meant to shock and disorientate you and shake you out of your capitalist bourgoise war mongering.  Goddamit. 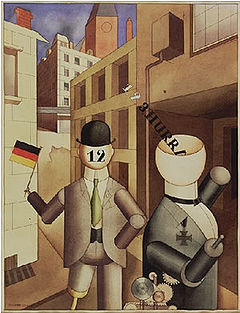 Gorge Grosz "Republican Automatons" 1920.  We get the flag thing, and we get the bowler hat.  We like the clockwork stuff and we are doing one of our own like this.  I am standing by Bognor Morrisons shop with a wooden arm, not leg, and my cycling hat on.  I will be waving a flag of sorts, but it may just be a flag with my name and phone number on for a bit of self publicity.
Now.  We are full of this anarchy lark.  We are into Anti Art, and feel that until this madness ends, we will put on strange public displays and hope to get arrested.  Our problem is that we don't really have much of an aim - there is a war on, but our little West Sussex Dada movement would not make much difference to that.   We are not very politically aware here, we tend to react to things in our own little sphere, and don't hold out much hope that Libya will settle down thanks to our anti art.  No, things that we are doing our anti art for are possibly that Sainsburys is opening here at some point and a few people are cross about it.  Fine, we say, we'll do a bit of anti art for you.  It comes to our notice that the Bognor Youth like to drink themselves silly on cider and beer on the beach of an evening. " Ho!"  We cry, "that is Anarchy but not as we like it.  Here, read this poem and mend your ways.  Join us for a spot of  ridiculing the meaninglessness of the modern world, but sober up first. Boom boom!   Fried Potatoes."
I have mentioned in an earlier blog that I was an Aberdeen Dadaist once in the early 1980s.  My friend Eddie Fisher and I stood for election to the student union as such, and I hadn't a clue what it was all about.  I had, I recall, my Dada hat which I wore with pride and ignorance, enjoying but not quite understanding the attention that I was getting.  Eddie knew all about Dada, he was a real intellectual, but I was just happy with my hat.  I met there one Gair Dunlop who joined the Aberdeen Dadaists, and like Eddie, being an intellectual, understood the whole thing.  Gair has been a close friend ever since then, and is now a well known and successful digital artist, film maker and university lecturer in Scotland.  It is to him that I dedicate our Bognor Regis Dada Movement.  It helps to have someone who knows what Dada is about, to keep us on track.  Except that he is very busy and lives in Scotland and probably doesn't have the time.  We may just have to make him into our Leader and not tell him, which would be very Dada and when he eventually finds out, we will be long past our Dada stage and be doing Turner somewhere near Petworth (where Petworth House has a huge collection of his paintings).  So any advice he may give us will be, hooray for anarchy, useless.  Hoooray.  Sorry Gair.  Boomboom Fried Potatoes.
Posted by Antonia Rolls Artist and Soul Midwife at Saturday, March 05, 2011