Bognor Regis Football Club. A Place Of Passion And Insight.

I have coined a new psychological term that may be useful.  It is called the Tracy Emin Personality Association Complex Disorder Thing. It refers to the sudden realisation that you want to do exactly and only what you want from now on, be paid a lot for it, basing all that you do artistically and expressively solely, utterly and only upon yourself .  It is a very good thing.  It means that you are rebelling and you are probably going to do something dangerously different.  Tracy Emin Association Complex condition comes on quite suddenly and can feel like a bolt out of the blue.  Hang on, you say to yourself as you make your tea and chocolate spread sandwiches, I don't want to do this painting that I am doing so nicely and lovingly for someone else.  I want to let rip.  I want to paint trolls in the background and give all the women moustaches.  I want to express myself and let my inner artist out.  I don't care to please anyone any more, I'm having a Tracy Emin Moment!
It is far too hard to take this on board the first time it happens.  Like a vocation to the religious life, you fear it and pretend it never happened.  Don't know what came over me, you say, as you wipe the sweat from your brow and remove the chocolate spread sandwiches from your fist.  You don't know why you punched them, but you blame low blood sugar in the morning and the stress of not waking up slim and beautiful as you hoped you might if you didn't eat the coco pops you so wanted just before bed last night.
The next time you are struck by the Tracy Emin Thing is when you are feeling listless in the late afternoon in the studio, and not wanting to call up new venues that may be interested in your work.  Before you can stop yourself you have called a gallery in London and told them that whatever they wanted from you, the answer is No and what is more, you are going to roll in flour and red paint to make an installation called "It's All About Me" and write down all the names of those who wanted to marry when you were twelve.  Like, for me, Alvin Stardust and Bryan Ferry.  What is happening is that you are experiencing an extreme reversal of your artistic choices and whereas before, you were happy to do whatever anyone wanted in the style they wanted, now suddenly (it seems) you are filled with a passion to shout Knickers! to your clients, and a furious need to do only what you want in your studio, with your art, for ever.  And alongside this furious reversal of your whole artistic ethos and business model, is the utter conviction that everyone that has anything at all to do with your new madness, will absolutely love it.  Adore it.  Fete you, promote you, write books on you and ponder your inner meanings - even ponder your soul.  Bring it on! you shout as a kind of battle cry, from now on it's Me Me Me!
I have been having a few of these moments recently.  I have been shifting slowly, it feels, towards simply doing what I want.  I have had enough!  I said to myself.  And so the painting of Rev Rachel Mann which was like this - 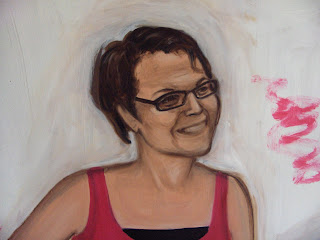 has been wiped out and is now this - 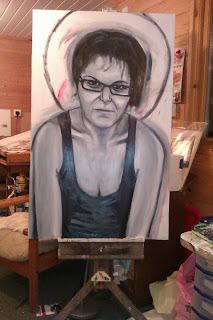 Poor Rachel has not seen it yet but this is how it is going to be.  Courage, Rachel, all will be well.  It is going to be mainly black and white and I bought loads of magenta paint to go somewhere in the back ground so it really will be something.
This is just the start of the creeping Tracy Emin Thing.  So far with me, it has only taken the form of Doing What I Want.  Soon, unless I practice deep breathing and eat lots of healthy vegetable soups, my whole artistic oeuvre will concern only, and obsessively, myself.  And if I am to do a proper Tracy Emin Thing, I will have to do it extremely well.  I will have to make my dirty laundry really speak to you.  I will have to exhibit my toenail clippings with passion.
The bottom line is that I like Tracy Emin a lot.  She is fascinating to listen to, she can actually draw and she does what she does well.  There is an integrity to her that I admire, and I love her intelligence.  So onwards, my troops, with this sudden explosion of assertiveness.  You never know, Tracy may get the urge to paint Angels and Veg Fairies and have a breakdown and I may exhibit my tonsils that were removed when I was twelve and have a breakdown too.
But this is getting out of hand.  I don't want any breakdowns. The whole point of this Tracy Emin thing is that it is healthy.  It is about doing your own thing and being bloody minded about it. So as Johnny Rotten so sweetly put it

My Tiny Feet Are Frozen

My feet are cold and so I will be brief.  It is September now and the wind is blowing around my garden under a low grey sky.  It is only natural then that my feet are cold.  I did not think twice about putting on my usual flip flops this morning; during the summer months I choose my flip flops to suit my mood,  my outfit, or both.   I paint my toenails red, or pink, or often paint the red over the pink and vice versa, and keep going like that until I have very tall toenails.
I am sitting in my studio as I write this, thinking and making plans but I keep coming back to how cold my feet are.  Despite the difficulties in concentrating, I have made a wee plan for today and I am going to stick to it stubbornly even though, even though - my feet are cold.  Very cold.
My plan for today is to email three people to say thank you for various lovely things, which I have done.  Then to write the A Graceful Death blog which I have done too.  (www.agracefuldeath.blogspot.com).  Oh, it is pouring with rain now.  When I leave here I will have cold and wet feet. Why do I have to suffer so?
My plan.  Back to my plan.  I have this blog to write and then I am going into the house to tidy, clean, wash and do laundry with Oldest Son who is, I hope, going to let me into his Quarters so that we can make his surroundings a bit more crisp.  If I ever finish the cleaning thing in the house, I will come back in here and paint more of Nushi and more of Rev Rachel Mann.
Rev Rachel Mann has been a bugger to do.  I have wiped the wood clean twice now and am starting again with a completely and utterly different style.  I am going to try to do her in black and white paint, with grey and maybe bright scarlet too.  I think this may be the answer, I have begun it and hope that I can make it work.  It is taking for ever, but I hope I will finish it before Rev Rachel makes it to Archbishop.
There are goosebumps on my arms now.  What is this coldness?  I have a warm boiler suit on and a long sleeved teeshirt.  I have blue and white spotty flip flops which we have agreed will not keep me warm, but the boiler suit has always kept me warm before.  Maybe I am coming down with something.  Maybe I am fading away.  Unlikely.  I had a dream the other night that I was now officially fat and got a certificate to prove it.  I don't think I am fading away.  Maybe I will be discovered like the poet Chatterton, dead in my garret, my tiny feet as blue as as my flip flops. 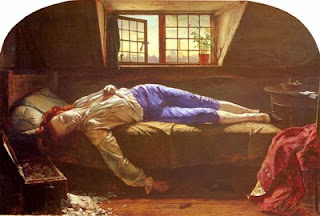 Henry Wallice The Death of Chatterton.  The young starving poet is found dead in his attic.  His feet look fine.
Oh!  I got it wrong! says Puccini, I meant to say, your tiny feet are frozen.
A rather sinister thought is that Socrates felt the effects of Hemlock from the feet upwards. He lost the sensation of his feet first, they became cold.  The rest of his body followed.  I have not taken any hemlock that I know of, I had PG Tips for breakfast, there wasn't any Hemlock in my tea caddy.  I think.
No.  I am not going to die.  I am being dramatic.  I am simply going to go back into the house now and put on my fluffy winter slippers.  I will put all my flip flops into a plastic bag and fling them to the back of my wardrobe as if Finally.  Our relationship over the last few summer months is over. There is no more need of you here.  It is time for boots and fur lined slippers. It is Over, do you hear, Over.
Whoops!  Time to go and clean the Son's Rooms.  Best foot forward and all that ha ha ha.
Posted by Antonia Rolls Artist and Soul Midwife at Monday, September 05, 2011 1 comment: