The Ceilidh, Macduff, The Ceilidh
Let me introduce to you Alan Mars.  He is dancing below like a true Celt. 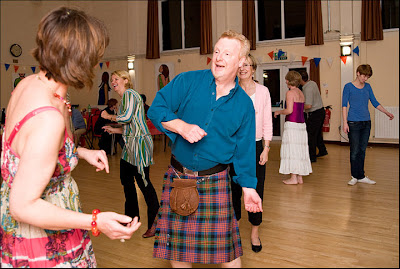 Alan Mars from Celtic Cadences provided our dancing and music, and here he is dancing with me, and looking Scottish with Red Hair and a Kilt.  He was very good and we all had a great time so a big thank you to Alan Mars.  www.celtic-cadencies.blog.co.uk
We began the preparations at 5pm,  formal jollities were  at 7pm.  I could not have done without all the help from friends who were wonderful in doing everything for me.  "Do This!" I remember instructing everyone nicely, "Do That!"  And when they were nearly finished Doing It, I said with a commanding voice "Do Something Else!" and they all did.  "It's her birthday,"  they all muttered to each other, "she is getting old.  Be nice to her, it's downhill all the way now for her, you know".  And in the background I could be heard saying, "Do More!  Do It Here!  And There!  And Another Thing..." and so on. 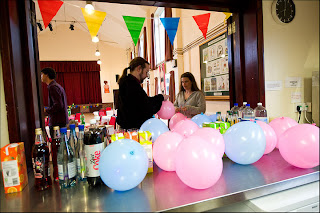 Gareth and Sam helping blow balloons up and hang them around the hall.  Each balloon had a little light in it that looked like a teeny Tinkerbell.  Gareth and Sam were so helpful, when they are 50 I am going to come and help them in their Ceilidh.  It's a promise. 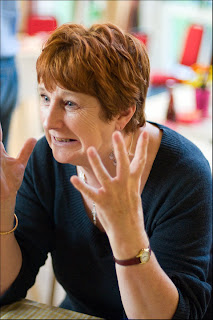 So here Coryn may have been saying No!  Get Knotted Birthday Girl!
And she would have been right.
On to the dancing.  Alan Mars looked the part, and was a very jolly fellow indeed, getting us all up and taking us through our paces.  He was possibly the most in need of a Medal as he arrived with his knees bound with tape and such like, to prevent them falling off because they were weak.  All hidden under his socks, making his calfs look as shapely as any Tudor Courtier.  And, he said in between dances, while gasping for breath, his ankles hurt so maybe a wee sit down.  Nonsense, I cried, because I had lost all empathy for my fellow beings, Another Gay Gordon and you can sit down for five minutes.  And so we danced.  I danced with Alan Mars, and have to say, he is a wonderful person to dance with.  I didn't detect any pain in his knees and ankles but then that was probably because I was being obsessive about dancing till we dropped and would have had to trip over him as he lay expiring and turning green on Walberton Village Hall floor.
Maddy, Michael and Marion all tripping the Light Fantastic.
And Simon, Katya and Adrian doing the same.
For food, a bright spark had suggested Fish and Chips.  And Fish and Chips it was, with Mushy Peas, Mushy Pea Fritters (Oh oh oh such wonders) and Sausages and Veggie Burgers and Onion Rings.  All served in their paper wrappers on red and white spotty paper plates, with salt, ketchup and vinegar....shall I stop?  Longing for fish and chips now?  Well go to Barnham Fish and Chips.  They must be the best in the Universe. 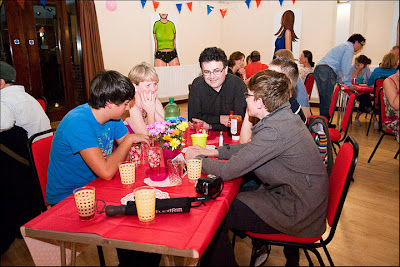 From left to right we have my nephew Francis, my cousin the Unmatchable Maddy, my brother Dominic, a teeny bit of 13 Year Old Son's Head and Maddy's son Charlie, so my cousin too in a once removed second kind of way. 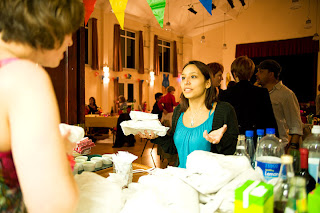 The Fatema.  The whirlwind for good that is Fatema.  Fatema made my birthday cake and provided fairy cakes for 50 because blow me down, she is a genuis.  Here is the beautiful Fatema collecting her Fish Supper for the evening.  Fair exchange for a large birthday cake with an edible photo of me on it and 50 sparkly twinkly fairy cakes, no?
And finally - the lady behind all these photos.  The Unmatched Queen of the Camera, The Observer Of All and Capturer Of People, Moods, Life and the Universe 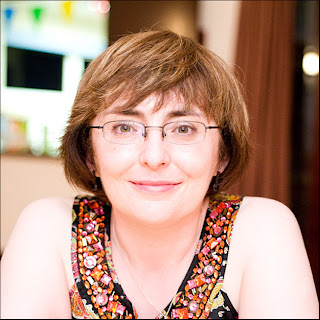 Eileen Rafferty.  Probably the Best Photographer In The World.  (Like the Larger Advert).
Thank You Eileen.
And Thank You to all of you who made the Ceilidh such fun.  When it was over, all the guests switched from Party Animals to Clearing Up Gurus, and everyone had the hall cleaned and cleared and washed and dusted by midnight.  When the lovely Walberton Village Hall lady came to check it over and lock up, it was as if we had dreamt it all.  Everything was done and the only clue that we had had a party was the faint echo of the Dashing White Seargeant echoing in the mists over Walberton and the faint glow of little Tinkerbells in Balloons hanging from trees leading up to the Hall.... and the shuffling of the Ceilidh Man as he staggered to his car before his knees and ankles gave way.
A Final Word.  Alan Bedford made the evening flow despite being barely able to walk from his damaged knee,  by being the Man Behind the Scenes.  He enabled me to have fun, to dance and sing and be a Birthday Girl by doing all the hard work that made the evening run smoothly.  Here we are, cutting the birthday cake that Fatema made,  with a swiss army knife, as no one had thought to bring any knives.  Just spoons and forks.  Thank you Alan Bedford. 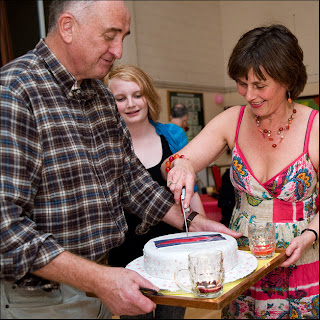