www.antoniarolls.co.uk for my website
www.jesusonthetube.co.uk for the most well known of my images of Jesus sitting being ignored on the tube train
www.agracefuldeath.blogspot.com for the A Graceful Death exhibition, paintings from the end of life


Bognor.  (Surreal.)
Today we have recovered from our Angst.  We are in a happier place, and it is possible that the Angst has pushed us ever so slightly over the edge, so that now we are living in an artistic world that revels in the strange juxtaposition of unrelated things and objects.  Are we potty?  Quite.  We are doing Bognor Surrealism, which may explain a lot.


Surrealism was founded after the first world war by one Andre Breton.  It was a philosophical movement dedicated to the expression of the unconscious through dreams, and inspired not only the visual arts but writing, film, music, thought and drama.  Surrealism came out of and from the Dada Movement, an utterly splendid and furious nonsense reaction to the first world war.  Too much rational thought and bourgeois values had caused the war, the Dadaists said, and so they produced Anti Art to make their point and to challenge the status quo. The Dadaist Artist, Marcel Duchamp,  presented his work entitled "Fountain" in 1917 to the Society of Independent Artists and had it Rejected.  Why?  Because it was a urinal inscribed with the words"R. Mutt".  Duchamp's most enigmatic and well known piece is a large glass Thing which he called "The Bride Stripped Bare By Her Batchelors, Even" which probably meant an awful lot to Dadaists.  I could never work it out - but I did once stand for Student Union elections in about 1980 as a Dadaist with my friend Eddie Fisher.  He got loads more votes than I did because I didn't know what Dada was, and he did, but I had a wonderful hat called the Dada Hat which made me feel very memorable indeed.  It was probably the Hat everyone (both of them) voted for.  I was completely useless.  All very Dada really.

So here we are in Bognor, being Surreal.  During our Surrealist phase, we wake up every morning having dreamed strange and powerful things (like last night I dreamed the Seven Times Table was a real entity and was sitting at my kitchen table) and we put it all down on paper, canvas, chip it out of stone or make it into an unintelligible song, frowning with concentration as we do so, refusing to let any convention, reason or conscious control hamper our masterpieces.  We phone each other up and say, "Just made a fish with a pineapple for a head."  "Whassit mean?" comes the reply.  "Dunno.  Got no conscious thoughts.  Could be anything.  Bye."

Here in Bognor we are always free of the conscious control of convention and reason.  We have the Bognor Birdman competition - a Dada inspired Surrealist piece of Performance Art if ever there was one.  Every year men (and sometimes women) dress as birds or hamburgers or something, and prepare to fly from the end of Bognor Pier.  There is a prize for the one who manages to fly - in their flying machines that they spend the whole year making, or without - the furthest.  Mostly, everyone just falls, with a shriek and an explosion of feathers, glue and plastic, off the end of the pier into the water below;  but it goes on for two whole days and the Japanese love it.  They come to film it every year.

Sigmund Freud's work on the subconscious, dreams and their meanings were central to the Surrealist Movement.  Think Salvador Dali - he is the most famous example. 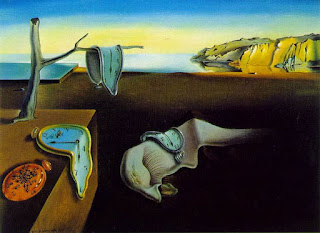 No-one had ever made a science and a study of the subconscious or dreams before, and it was quite literally, revolutionary.  And those of us who are now Bognor Surrealists, we do not need to just paint our uninhibited interpretation of our dreams.  We can Automatic Write too.  Surrealists were encouraged to not only put unrelated things, ideas and thoughts together to create new meanings, they were told that Automatic Writing was even better.  Cover the page with a stream of consciousness, and boy - you are a Surrealist!  That is what us Bognor Folk do of an evening when we are between the End of Work and the Start of Supper.  "Oy, Chantelle, write me a Surrealist poem will you, while I cook the sausages?  Mind you keep it free of any control exercised by reason, and for God's sake keep it outside all of that aesthetic and moral preoccupation stuff." "Righto.  Done a stream of conscious shopping list, will that do?"

I am very, very tired at the moment.  I suspect the whole reason behind the current Bognor Regis Surrealism Movement is for me to go to bed a lot and stay there.  "Don't bother me!" I cry to my poor hungry and lonely children, "I'm doing research."  And as long as they can hear deep, healthy, dream laden snores coming from the darkened room, they will know that Mummy truly is an Artist. 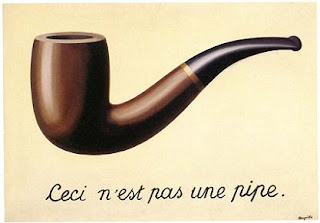 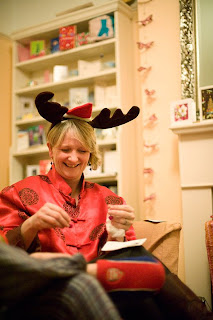