What To Do Next

http://www.antoniarolls.co.uk/ for my website
http://www.agracefuldeath.blogspot.com/ for the latest on the "A Graceful Death" exhibition in Birmingham now till Sunday March 28
antonia.rolls1@btinternet to email me 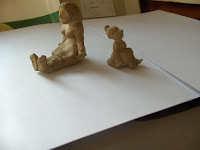 In the meantime, here are some Drying Gnomes for Plant Pots. They will be painted and varnished, and so far there are only three of them in total, they take a good while to get them to this stage. Making things with clay, I say, is Blinking Difficult. All you clay makers out there will smile indulgently now, and say kindly "It took us nearly 50 years to get where we are, but well done for trying" as they go back to their mini Taj Mahals in clay with all the mini people bustling about inside.

Here are the things on my mind

And then there are other things that I am thinking of and planning. Here, because I want to be orderly and precise, they are in bullet form

Must go now. Today I am going to Help Daughter who has turned magically from 19 to 20. She is now 20 Year Old Daughter and I am still going to help her. Having gone to Manchester on a Mad Birthday Party Bash Whoopee, she has come home tired and droopy to work 7 night shifts in a row and then go to America for ages. She needs her Mum to pick up the pieces and do her shopping and make her tea and not say anything at all about choices and consequences.

Eileen and I meet later in Brighton and go to a lovely old pals for tea then home to 13 Year Old Son who may now be over 7' tall the way he is changing and confusing his old Mum.

Oh but I need a secretary, a manager, a planner, a sponsor, an events organiser, and a Whim-Indulger whose only job is to say Yes Antonia, At Once Antonia. Will speak to Alan and ask if he wants the job.