http://www.agracefuldeath.blogspot.com/ for the latest on the "A Graceful Death" exhibition opening in Birmingham on Monday 8 March
http://www.antoniarolls.co.uk/ for my website
antonia.rolls1@btinternet.com to email me

Oh So Busy. No Rest For The Wicked Etc But It's All My Own Fault 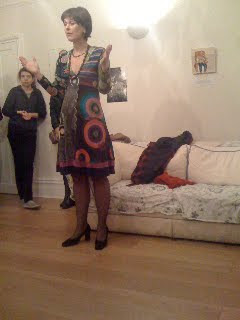 Here is the Inaugural Speech for the "A Graceful Death" exhibition in London. I am wearing my new dress, yes, and I am very glad you like it so much. This is the one that Alan is trying to reconcile himself to because it is not Balanced and it is a bit Random. I think everyone who wanted Order listened to my words and coped that way, but those who could manage Not Matching On Both Sides listened to the speech and coveted the dress. This is how it should be.

I have to say again, Costya - my oldest son who has given orders for me to use his name - was a total star. He was there most of the time in between college during the week, helping and giving support. Thanks Cos.

So. I finished on Sunday. The Closing Night Party went on long after midnight and I went to bed before the last guests had left. I thought by then it was no longer about the exhibition and me me me, more about the bottles of red wine and left over eggy sandwiches. I was utterly exhausted. Monday was spent taking down the exhibition and trying to rebuild the wonderful Clarissa's house. It was sort of mostly done-ish by the time I had to go to my sister in law's house to get ready to go to Dorking for a Birthday Bash for 19 Year Old Daughter as she turns 20. Puff puff pant pant, it is not over. Home then, after that, about midnight. 13 Year Old Son not complaining, but has school next day. 13 Year Old Son had been passed from pillar to post while I was in London. He came to stay with me at the weekend and true to form, when I dropped him off at the station to catch his train to his friend's house in Chichester on Sunday Eve so he could go to school on Monday ("Shucks. Do I Have To?" "Yes My Son! It Makes My Life Much Easier."), he disappeared into the station with his little handkerchief bundle on a stick. About an hour later he called me from Brighton. He fell asleep and is in Brighton. There followed a series of calls and texts about what train to get where, at what time, in order to arrive, sometime, in Chichester. Most of the first half of the Closing Night Party was devoted to all of us, stopping what we were doing and listening in on the next installment of where 13 Year Old Son was now. He had moved beyond advice from me and was evolving complicated train journeys which meant he was never waiting more than a few minutes anywhere as long as the train at the station he was at was going in the direction he imagined was Chichester. During the evening, people I had never met before came up to me and asked "And Where Is He Now?" I knew they didn't mean Steve, they were caught up in the Chichester Drama. Eventually the phone calls stopped and we all presumed he was with his friend, hours late, but safe. As the friend's mother didn't call to say she had had a ransom demand, we were sure he was with her.

He had the interesting hollow eyed neglected look that you see on dreadful drama documentaries the following morning. "Never Mind" I cry as I send him out to get the train, his shirt tails out, his blazer on back to front and his chin touching his chest as he forces his tired body to endure another day as Son of An Artist. "Love You" I add lamely as he wanders drunkenly to the station aged only 13 and already living the Bohemian Life.

So Tuesday I went to Tunbridge Wells to visit and photograph my wonderful Aunt's husband in his hospice. He had asked to be included in the exhibition, and so I went and saw him and photographed him and my Aunt. They are meant to be together, I will paint a portrait of Love. My Aunt's husband will not last much longer, and is, he says, between two worlds.

Wednesday I clean the house and see a friend and go to see Daughter in Brighton. Today I am so pooped that I am dribbling. However, today I have to prepare a Speech! For Birmingham! On Monday I make a big public address and I am not ready! Maybe I can show them all my paintings and say What Do You Think? and ask for more tea to be delivered.

It is, though, my own fault. This is the life of an Artist. We do this kind of thing. If we are lucky. We make a difference, we put ourselves into our work Heart and Soul. We have to be there so we can make an impact with our work. Oh it is all about response. I have had the most stunning response to A Graceful Death. And, it goes on to Oxford after Birmingham.

I have though, a day off on Wednesday. I am having a Milk Tray Day. The whole day is given over to eating Milk Tray. That is true genius.
Posted by Antonia Rolls Artist and Soul Midwife at Thursday, March 04, 2010