Alone In The House. There Is A God.

http://www.agracefuldeath.blogspot.com/ for the latest about the A Graceful Death exhibition opening this Wednesday in Wimbledon
http://www.antoniarolls.co.uk/ for my website
mailto:antonia.rolls1@btinternet.comom to email me

Alone In The House. Thank You. There Is A God.

It is not that I don't love adore and cherish everyone that is in my house at all times, it is just that it is like a Naughty Moment Of Freedom when everyone has gone. Almost like I should not have this dangerous gift of utter freedom - at a weekend too. It feels like I have a Get Out Of Jail Card Free. Yippee. Hooorah.

Let us analyse this a bit. I am alone in the house. I am in my studio. If there was anyone in the house, across the garden, I would not see nor meet them. But there is a feeling of the space around me being bigger, there are echoes in the rooms that are not there when there are people about. There is no hint of a shadow passing at a window on its way to the kitchen to eat Everything In The Fridge and Leave The Washing Up . The loo seat is still closed when I go back into the house every now and again. No one has had a bath and so the towels and the floors are dry.

And no one is coming out of the french windows in the sitting room in their pyjamas at 2pm, picking their way in the rain across the garden to ask me an impossible question like What Is There To Eat? Or When Will You Be Finished? Or Have You Done My Washing? Or even Who Are You?

There is a feeling of being unaswerable to anyone, there is a feeling that if I want to eat (as I do, but not until I am celebrating something) a whole box of Milk Tray, both layers, I can. I can start it without comment or preparation, in my studio, wander with the box and a brown mouth to the sitting room where I can watch telly for a while. Then I can, if I like, take my dribbly brown mouth and sticky hands and the Milk Tray box to the kitchen, the bathroom, any of the bedrooms, and in each place, sit and Have Another Chocolate. I am going to do this one day. It is a Given.

13 Year Old Son has just phoned to say he won't be home for 7pm as he has 7 more stops and each stop takes 10 minutes. Lordy, I thought. So I phoned him and he said he was at Amberly which is only a few stops from Bognor. Surely, I said, it won't take you over an hour to get from Amberly to Bognor? You talking to me? he said distractedly. I gave up. Sweetie Pie, I said, your food will be ready when, and if, you get home. It seems he wanted to pass on his angst, by giving me an emotional and innacurate text, the facts were not important. Just the feeling of being doomed to be on the London to Bognor train for ever and ever and ever. When challenged, he lost interest. I am going to be like this. "I am on the brink. Life can't go on" I will text to Alan. When he phones for an explanation I will say "Are you talking to me? Can't seem to choose which Milk Tray chocolate to choose next" and he will say to his family and friends, "Antonia just wanted to get the feeling of not knowing what to do next. Doomed to indecision about her Milk Trays felt as if she was doomed to indecision about Life".

My exhibition, "A Graceful Death", starts on Wednesday. Hiram Burnett is below. He was, as his daughter Cecil says, a character. I think he was in the room with me when I painted this. Cecil was with him when he died, and her account of it is very moving and loving. I hope to include this too, with the painting. 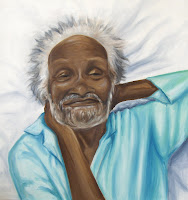