www.antoniarolls.co.uk for my website
www.jesusonthetube.co.uk  for my other website and the popular Jesus on the Tube image and story
www.agracefuldeath.blogspot.com for the A Graceful Death exhibition, paintings from the end of life
antonia.rolls1@btinternet.com to email me

A nice pic in that it shows the Butterflies that Helen (Makeover Angel) and the Lovely Lucy gave me for my birthday.  They sparkle and catch the light and the Fairy in me goes and stands amongst them and pretends she can fly.  I am holding Cousin Min's spotty mug and saucer with red gerbera (thank you Min you treasure) and wearing the red cardi that the Ginger Best Friend and her mother, Dear Bognor Friend, got me.  All in all I am doing well.   I was quite slim in this pic.  I would blot out the window today.
The Birthday Weekend of Rolling Tea And Cakes really has happened.  Most of us are on diets now, and quite a few of us wonder if we can take the week off.  Cousin Maddy, who came with her two glorious children to make me happy, says that we will all sink into a terrible depression this week as the sugar rush and high we have been eating is abruptly stopped. (There was no other food in the house except cake and cake making ingredients).  Oh but the cakes!  Oh but the CAKES!  Let me just fill you in.  If you were here at the weekend, have a lettuce to hand and grab it when you feel you are becoming unstable, as I take you back over all the cakes and cream. If you weren't there, you may have a packet of biscuits ready because you are going to need them.  The amount of cakes this weekend was Serious.
I made 10 trays of cakes on Thursday.  I did.  It took a whole day, and there were variations on sponge - some with chocolate chips, some without.  Some with fudge pieces, some without.  There was Vanilla Sponge, there was Chocolate Sponge.  There were Fairy Cakes in spotty cases, there were Fairy cakes with Icing in gingham cases.  There were variations of cake, chocolate, toppings, food colourings, size, additions (a creamy cream cheese and icing sugar layer on some, thick chocolate butter icing on others, strawberries, fresh raspberries).  There were flapjacks there were glittery professional fairy cakes with icing sugar roses, and teeny glittery fairy cakes with sugar butterflies on from Mrs Smith (www.mrssmithin2010.blogspot.com.  Very funny blog.) And there were teapots on the go at all times, some with weak tea and a few with very strong tea for those of us who like to chew our tea.
Over the weekend, there must have been about 60 people all in all.  It was absolutely wonderful.  Even though the weather was cold and raining and nasty, we were all in a Winter Wonderland of Cake and Tea in Bognor, and all through the weekend, I turned more and more into a fifty year old, ending up last night with me tidying up and putting things away as soon as the last guest left, and sitting down eventually - in a nice clean tidy house with all the washing and washing up done - and feeling like Princess Fiona in Shrek.
After the second day of Non Stop Pass The Wheelbarrow Of Fairy Cakes, No, The Ones With Chocolate Buttons And Butter and Sugar Icing, Thank You, the Core Birthday Household of me, my kiddies, Maddy and two of her kiddies, Eileen and Alan sat down in the kitchen and began to talk about Lettuces and Cucumbers.  "An early night" we said to each other, as we loosend our belts and tried to sit up straight.  "More cakes tomorrow," we chuckled to keep the panic at bay.  And then, into the sugar mist that was my house, came whoops of joy and obvious confusion.  We were treated - really treated because they looked so so wonderful - to Cecil from Wimbledon and her sister and her friend who thought that the Birthday Ceilidh, that is due in September, was tonight.  Yes.  Cecil got her sister and friend ready, promised them the evening of a life time only to find that Walberton Village Hall, where we are having it (next month, in September,) was closed, Walberton was closed and and there was a deathly silence over the whole of the area.  Not a sound.  Not a fiddle, not a squeak of a flute, no stamping of Scottish Country Dancing Feet - not a whoop could be heard.  West Sussex had gone to bed.  Except for Bognor Regis, which was too fat to go to bed.  So in they came, with party frocks, champagne and glitter to join us sugar junkies in our kitchen amidst the debris of day two of a full on  Cake Fest.  We stared.  They fell about laughing.  We stared again.  Someone put the kettle on and we gave them some cakes.   Cecil is a treasured close friend and she had to come all the way from London, to a party that was for next month, and we were only able to dribble and squeak when the Party Girls entered the house.  The champagne was opened, of course, and we had a wonderful time wishing we looked as good as they did. We have time.  September is next month and we can hope.
Sunday, yesterday, was ruled by Pavlova.  Maddy makes Pavlovas for folk and has only enough equipment to do it in industrial quantities.  Most people came on Saturday, so by 4pm yesterday, we laid the big oak table and had the Pavlova (meringue, cream, chocolate and strawberries and more cream and did I say meringue?) and flapjacks and glittery roses fairy cakes and tea.  Just for a change.  More guests came and we made them eat Pavlova because it was becoming, as you can imagine, an obsession.  We had been three days in this state, of an increasing Sugar Overload, so we were like Junkies making other people Do As We Do which was Go Mad And Eat Cake. 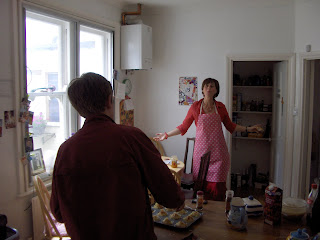 Dancing  during the Cake Making.  The Official Weekend Photo.  For PR purposes.  Harmless. 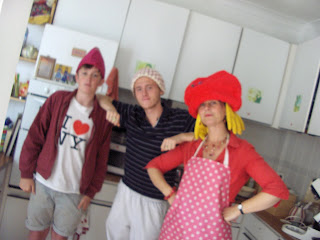 How it really was.  We wore teacosys and listened to reggae and thought we were hilarious putting washing up gloves up the sides of the teacosy and pretending they were dreadlocks.
And Finally.  I want to show you the loveliest teapot you will ever see.  The beauty of this teapot is that the colour, the shape and the style are all rather modest.  But the more you look at it, the more perfect it is.  It was Alan's present, a find in a shop somewhere, waiting to come and live with me. 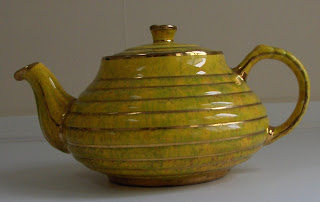 But I will have my tea with low fat celery and low fat water and low fat lettuce from now on.  I don't think at my age any more cake would be a good thing.  I don't think any excess at my age now would be a good thing.  At least, not too often.  Just a little excess now and again and a nice day off after with a game of bingo to recover.  Mind you, they say that bingo keeps your mind active and staves off Alzheimers.  I wonder if actively choosing to go AWOL on cake staves of Alzhiemers?  Dunno.  What did I do this weekend again?
Posted by Antonia Rolls Artist and Soul Midwife at Monday, August 09, 2010