http://www.agracefuldeath.blogspot.com/ for information on the next showing of A Graceful Death in Milton Manor in Oxford this Saturday only, as part of the Festival of the Nine Muses.
http://www.antoniarolls.co.uk/ for my website
http://www.jesusonthetube.co.uk/ for my other website
antonia.rolls1@btinternet.com to email me. 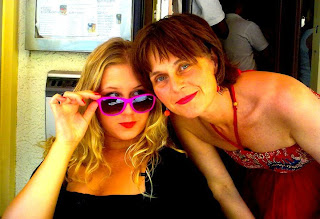 Yes, yes, we have all seen me but look at this Barbie and her Barbie Sun Specs!  This is 20 Year Old Daughter in Brighton at the Muppet's birthday party.  I own a Barbie, and isn't she lovely?  She is a good six foot tall and very feisty and I like it that she is so blonde and fair when I am a swarthy gipsy type.  We were in a pub watching the England v Germany match but as true members of my household we were outside taking photos of each other, being witty and eating crisps.
I will post the Muppet and His Mother at the end of this account.  So you have to keep reading because now you are hooked.

The Briefest Of Visits To Antonia Land Today
I think I am slowing down.  I no longer feel my eyes are going round and round like the red and white barbers signs, and I can feel the beginnings of a headache coming on.  I am coming in to land from outer space where I have been looping the loop and unable to stop.  I am beginning to slow down.  This is good, but would be good if it happened next week when I have planned my Day Off in the sun.  I have seven days at least before I can even think of a rest.


So.  Eileen and I did our photo shoot at the Glorious Clarissa's on Saturday.  That went so very well, and I was uplifted and thrilled to be with such affirmative people. They always do me good, and all that we had to photograph for paintings, for prints and for commissions coming up, were done is perfect sunshine and companionship.  With tea and crumpets.


Yesterday I did my goddam car boot sale and made a grand profit of £7.40p.  Bloomin heck.  That is just over a pound an hour.  And it was very windy and I had a pitch under a huge avenue of trees in a kind of wind tunnel where there was a permanent Arctic Front.  Say no more.  I wore at least two of Alan's jumpers that I was trying to sell (he knows.  Not a fit of pique) and a blanket I brought for possible snoozing in the car while I was waiting to enter Fontwell at 5.30am.  So I was Not Fulfilled yesterday afternoon.  I thought Life Was A Bugger for a while.  Then I got home, had a hot bath (Yes!  In July!  Damn and Blast It!) and played the best game of Monopoly I have ever played with 13 Year Old Son, so felt better.
A Word On Monopoly.  I hate it.  I can't work it out, I am not competitive and I would much rather waive the rents so that the other players will love me.  I can't see why anyone would want 3 houses when 2 would do, and as for hotels, what a lot of extra hassle.  Think of all the housework.  13 Year Old Son gave me a small tutorial which went in one ear and out the other.  He told me of the probabilities of the dice landing on this space or that, of the necessity of planning your acquisitions and how to make the dice fall in doubles not singles.  "Yes, but, " I said.  "What is it all for?"  "Why Mother," he said with a cheeky grin and a quick back flip,  "it is to destroy your opponent."  Aaah.  That is why I don't get it.  I want to help my opponent, and take it very personally when they charge me a rent I can't afford.  So.  I started to cheat.  13 Year Old Son saw it, took it all in and made an instant executive decision, and decided to help me cheat.  At that point, he had hotels all over London and 25 million pounds.  I owned some Utilities and had 500 thousand pounds, and although I thought that under the circumsances I was rich beyond imaginings, and was beginning to plan a long holiday in the Mediterranean, I knew that I was going to be fleeced by 13 Year Old Son sooner or later, and forced to live the life of a Pauper and the game would be over.


The game became fun, jolly and what is more, I understood it once I started to cheat.  13 Year Old Son and I spend hours enabling me to hold on to my Utilities, my 500k and have that holiday in the Med.  And he mysteriously went up to 30 million quid and his hotels had hotels on them, so maybe it wasn't just me that cheated.


I am off now to paint.  I feel tired today and slightly fuzzy headed.  I am going to an Open Mike Night it seems tomorrow, and I am thrilled. I will see Busy Arty Man Who Has A Fab Car and his Ginger Best Friend singing and what is more, the Muppet has been invited.  Oooh.  Will the Muppet handle being in a local pub with his Mum?  I will have to pretend to be a Wierd Old Stranger.  He can throw peanuts at me and say Look!  I am throwing peanuts at this wierd old stranger lady who I don't know and have never met and couldn't possibly tell you who she is but isn't it fun!  I am asserting myself!


Now.  Don't forget to go to Oxford this weekend to see the A Graceful Death in the Festival of the Nine Muses.  http://www.miltonmanorhouse.com/ for details.  Come and see an exhibition on Death and Dying and Love and Hope in a Greenhouse with No Glass and girls dressed as Muses reciting Love Poetry.  And workshops.  And Nuttiness I expect, as only Poetic Gals and the Chelsea Arts Club can do.  I look forward to it, and will Go With The Flow.  Come and Flow with me.  Clarissa will be there, and between us we will Do Our Stuff. 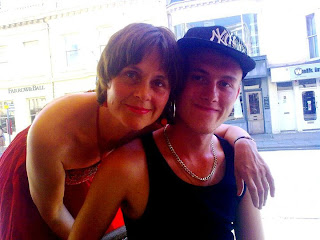 The Birthday Muppet. The one with the cap.
Posted by Antonia Rolls Artist and Soul Midwife at Monday, July 05, 2010