We Doggone Did It.  A Graceful Death Made Having Tea A Whole New Experience. 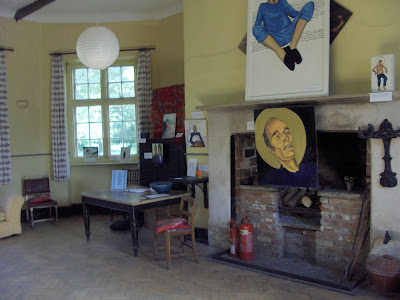 A Graceful Death is set up in the Tea Room of Milton Manor House.  We removed all the wonderful clutter that we could, and covered the stuffed foxes with Russian shawls. 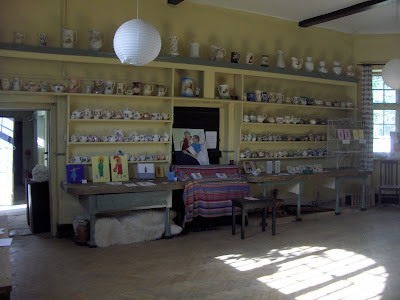 The Teapots.  A Million of them.  I wanted to climb on the shelf and sleep amongst them.  And the paintings, all set up and looking so good in the large open room smelling of centuries of wood and tea and life. 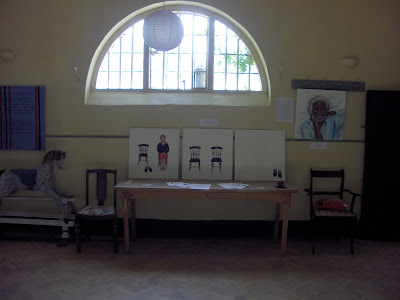 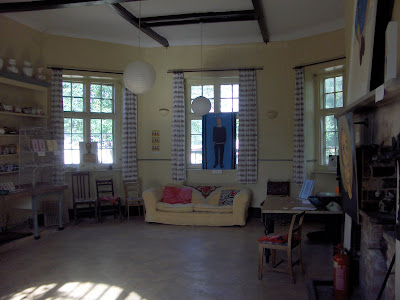 I sat on this sofa and listened to people talk when they wanted to.  And some were very keen to talk for a long time and I was delighted to listen.  Some wanted to spend a few minutes connecting with the exhibition and their own experiences, some wanted to work out the effect of life and death in general.  Some just wanted to sit.
Milton Manor.  We did it.  It was great fun and I did make a teeny movie of it, and it is going to be edited and uploaded but I left the box with all the leads and instructions under the table on the right hand side of this picture.  I am hoping they (The Muses) will find it and send it on.  Oh this is just as exciting.  I made my first moving pictures account of the weekend, and some of it makes sense!  I saw it on the camera and played it back to myself and thought maybe, just maybe, Hollywood should watch out.
The Muppet and I left at 3pm on Friday.  He of course helped packing by putting his bag in the car at the last minute.  I did all the rest but did so with a smile on my face.  He was, aged whatever, coming to his first festival with his mum.  How cool is that.  Poor Muppet. Amused and chuckling Mum.
We arrived at the Manor, and left the real world somewhere on the A34.  We drove up to the house while a man on a white horse and no saddle cantered across the lawns from the left and disappeared into the outhouses on the right.  Gosh I thought.  I expect that is an Extra hired to canter across the lawns every time a car pulls up, so that we can see we are coming to a classy joint where we had better not make a fuss.  I expect he goes into the outhouses, round the back of the building and waits under a tree at a designated spot and when the lookout waves a red flag from behind a bush he canters out looking neither left nor right and sets the scene for us.
"There is a change of Plan," says the Muse (The Festival of the Nine Muses was organised by Nine Muses in Character at All Times) we met as we pulled up in front of the house.  "You are in the Tea Rooms."  Gosh I think, did God tell them in a dream that if you want Antonia to love you, you put her in a tearoom?  We followed the Muse into a tearoom  and lo, I did love her.  Madly.  The room was huge, an old kitchen/brewery depending on who was describing it to me, and it was used as a tea room when the house was open to the public.  This was better than being in a Greenhouse with no glass in a field somewhere near a Silage Plant.  Not of course that there was a Silage Plant in the literature, but there may have been one .  It is not the sort of thing they would make into a plus point in the PR Drive.
So I set up.  The Muppet tried to help but he had some phone calls to make and some clothes to change into and some Walking Around to do.  I sent him off to see where we would camp.  He did so.  The Impossibly Handsome Billy was there, (he popped up at the Glorious Clarissas for dinner a while back and wore just the right shade of blue in his shirt) and Billy was utterly invaluable in setting up, helping out, and Doing Stuff.  He is connected to the Manor, and his wonderful Lady, Henrietta, was also there and is his connection to the Manor, looking Striking and Memorable and gearing up to her performance later on the Saturday as the Pussy Cat in the Owl and the Pussy Cat, which she and Billy were to Do in a boat on the lake in front of the house.
The Glorious Clarissa arrived before the Amazing Angela with her Kath Kidson Wigwam. 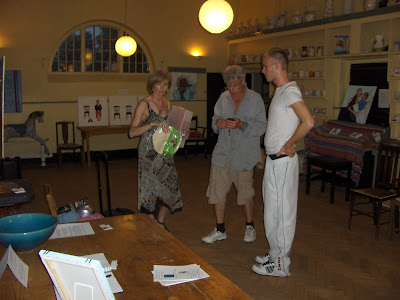 The Cast so far.  The Glorious Clarissa, the Remarkably Handsome Billy, and the Groovy Muppet all helping to set up the A Graceful Death in the Tea Rooms.  Soon you will see the Wigwam and All Will Be Complete. 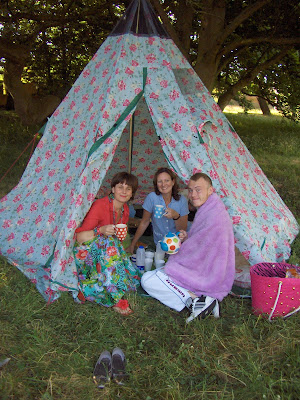 The Kath Kidson Wigwam!  It is All OK!  It exists.  Here we have Me, Amazing Angela and the Mighty Muppet having breakfast the morning after the first night before, if you see what I mean.  Note I bought my spotty teapot and six spotty mugs.  No slacking of the Standards here.
The exhibition was really so unusual in amongst the Festival of the Nine Muses doing their poetry thing.  The link was Love, and very appropriate it was too. I will write up an account of the acutal exhibition in the A Graceful Death   http://www.agracefuldeath.blogspot.com/ .  As ever, it was moving and very profound.
And there was reggae!  Some inspired Friend of a Muse set up a stage for the musical entertainment which was happening from about 7pm onwards.  To fill in the hours between the setting up of the stage and the start of the concerts, the tranquillity and peace of the Milton Manor grounds was filled with the deep and meaningful offerings of Big Youth, and all his pain that Rasta was misunderstood and only wanted a Spliff.  I was entranced.  Reggae is my thing, and I could hear it from the Tea Rooms, where I sat swaying like a Very Happy But Switched On Rasta Mama.
At nine o'clock, I packed up.  I needed to be absolutley unfettered for the night ahead.  There were parties in them thar marquees.  An utterly beautiful lady, 6'2" and perfect from head to toe, offered to help me.  She was a Psychology Graduate, and bright as a button.  With her help, and many surrepticious glances from me at her black lipstick which only someone of her stature and style could wear, the exhibition was put away and the way cleared for Partying.
But, my friends, I am nearly 50.  By 11pm I was pooped.  I sat with our crowd amongst candles and hundreds of other folk, with food and shawls against the cool night air, listening to Modern Minstrells and Rock Bands play, one after the other, and thought I may just have an early night.  Our friends Tuula and Tony from Wimbledon had arrived to join us, and I leaned against Tuulas legs as she sat on her foldy up chair and said Blimey, I am A Gonner.  Tuula said I should give it a bit longer, but I felt my brain was seizing up and I was beginning to talk like someone having a stroke.  So Angela and I, both with no real sense of Stamina At A Festival, went off for an early night.  The Muppet meanwhile, had found a whole new set of friends and had set up another little Posse round a camp fire yards from us.  I could have waved to my darling Overlord through all the smoke from his campsite and called "Mummy Loves You Pet" but I didn't.  I wandered over to his set up like John Wayne and said "Hey.  I am going now." And left it vague as to where I was going.   I added "Night then" and tried not to show ownership of the Muppet as he stood to hear me speak.  I thought in a split second, should I shake his hand?  But no, that would be confusing to his Posse.  So would a John Wayne Hoik and Spit, so I just nodded and muttered "Not too late Baby Face" and went off into the night.
The Glorious Clarissa came a few hours later to try and rouse us to go to the Ceiledh but I couldn't move.  My Sleeping Bag Attached To A Blow Up Mattress All In One Affair For The Lilly Livered was just too addictive and I stayed put.  Angela got up and went off though.  I heard the Festivities go on all night till about 5am, but at no point did I want to go and join in.  I need my strength, I have much to do during the days.  I had to drive back home on the Sunday and go to another Barbeque and Behave Myself.  So no slurring of speech because I was up all night before.  I was to collect 13 Year Old Son from the Barbeque which was a Leavers Celebration, as 13 Year Old Son and all his class mates had reached the end of their time at their present school and were leaving forever for Real Schools elsewhere.  I even met the Maths Teacher for the first time when I arrived on the Sunday at the huge and wonderful house where about 70 people were eating, chatting and chilling while all the kids swam, played tennis and whooped around like the nice teenage kiddies they are.  About the Maths Teacher.  I never knew when there was a parents evening because the Child Never Told me till it was too late.  So I have never set eyes on this man, who also wondered whether 13 Year Old Son was perhaps a Foundling.  Much was said and cleared up, and much fun had going over Son's five years of Maths at the school.  To be fair, I kept in touch with Son's form teacher who always kept me up to date with his progress, so there were no shocks but, without ever meeting the Maths Master, we both thought the other didn't exist.
Now, Monday Morning.  I have much to do and much to think about.  I have been asked to take A Graceful Death to the Edinburgh Festival next month, but that may just be a Spur of the Moment Thing.  The lady who offered was a similar soul to me, and I would dearly love to see her again anyway.
Before I go, here are the loos from Milton Manor.  Amazing. 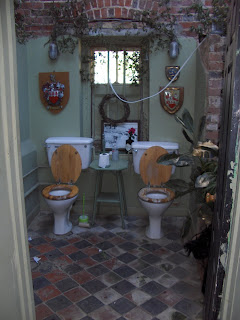 Take a friend in for chats while you wee.  Wonderful.
Posted by Antonia Rolls Artist and Soul Midwife at Monday, July 12, 2010