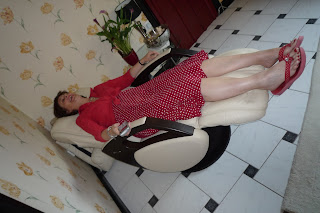 The Boutique Bed And Breakfast Massage Chair that was a Must before breakfast.  I felt that Snow White's seven dwarfs were hammering away at me but it did me no end of good.  Clarissa nearly died laughing when it was her turn so I want to know what buttons she pressed on the controls.
No no no.  I am not going to die.  If I did, who would feed the French Student?  Who would smile and nod at the Sexy Polish Grandmother Who Speaks Not A Word Of English and Lives In My Spare Room?  If I died, how would 13 Year Old Son get his Whole Roasted Ox for breakfast and all his other meals?  How would the Angels get painted and how, you tell me this, would the A Graceful Death be developed and made More Excellent than it already is?  And further more, who would wear my new Marks and Spencers Fancy High Heeled Shoes that I bought with Clarissa in Oxford?  There's a sobering thought.  Who would wear those shoes if I died?  And since I am about 6' 1" in them, I think I need to stay alive to make sure I get to as many places as possible in them and make sure everyone loves them as much as I do.

Day Five of being Single. It is not so bad.  It is possible to do.  It is the right thing to do, and it is made so much better by knowing that there is a man who loves me and wants the best for me, despite our decision to call it a day. It makes the future friendly, not hostile.  And I wish Alan all the very very best and know that he will find his peace and happiness because he deserves it.

Now.  Onto other things.  Here they are.


Apart from that, I am being cheered along by friends and family and I am having a Barn Dance for my 50th birthday.  It is a fact.

Now. Day Five is underway, and much has to be done.  Onwards, as I keep saying, and Upwards.
Posted by Antonia Rolls Artist and Soul Midwife at Monday, June 07, 2010